Home prices rose by 0.1% in September from the prior month and by 3.6% from one year ago, the largest such gain in six years, according to a report released Monday by Lender Processing Services.

The LPS figures serve as a good reminder that it’s still hard to generalize about housing. Some markets are up sharply amid big declines in both prices and the share of distressed sales, while others are still soft. Generally, though, there are at least five significant contributors to rising prices:

Housing affordability is attractive based on traditional metrics such as price-to-rentand price-to-income measures, largely because prices have fallen so far. Housing is even more affordable considering today’s low mortgage rates. Many buyers judge their decision based on the monthly payment of a mortgage. The average payment on a median priced home last month, assuming a 10% down payment and not including taxes or insurance, fell to $720 at prevailing rates, down from nearly $1,270 at the end of 2005.

Household formation is revving up. The U.S. is on track to add 1 million new households this year, up from 630,000 last year and an average of 570,000 over the past five years, according to economists at Bank of America BAC +0.48% Merrill Lynch. Based on normal population growth, that rate should be closer to 1.2 million households. The upshot is that some pent-up demand is being unleashed, in part because job growth has picked up.

Rents are rising. Falling mortgage rates and improving job growth didn’t do much for housing last year, in part because buyers didn’t have much confidence or urgency. Rising rents have changed that. Initially, they spurred more investor purchases of properties that could be rented out. More recently, they’ve given buyers a reason to get off the fence.

The share of distressed sales, such as foreclosures, are down, and in many Western markets, they are down sharply over the past year.

Why are distressed sales falling? For one, mortgage delinquencies peaked 2½ years ago. Banks also slowed down foreclosures as a result of the robosigning scandal, and they’ve stepped up foreclosure alternatives, notably, by shifting short sales into a higher gear. The share of distressed sales is still high, historically speaking, but because they have fallen from their peak in many markets, prices have stabilized. 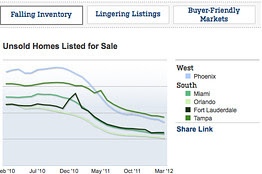 This isn’t to say housing is out of the recovery ward. Credit standards are tight. Millions of homeowners are in some stage of foreclosure or default, and millions of others still owe more than their homes are worth. If the economy weakens again, the housing market could relapse.

But if 2012 has taught anything, it’s that those headwinds haven’t been enough to prevent the housing market from healing.